Letters from the backwaters

(From a letter found in the pouch of a mail carrier bound for Silvermoon City.)

I hope this finds you well. I am well as I can be under the circumstances, though the mana crystals are plentiful if you don’t mind a little walking, and the scenery is top-notch.

As I mentioned last letter, my assignment here to Mok’nathal is nothing more than a misunderstanding. I have petitioned Colonel Bor’njaab to reconsider my request for transfer back to someplace with, well, somewhere on the same planet as yourself, for starters. His assistant believes that as long as I can provide evidence that I was nowhere near that latrine when it exploded, all will be well, and, as you know, I’ve got that covered.

We don’t see many new faces around here any more, which makes the appearance of our latest addition to the Orgrimmar contingent even more notable. As you will see, that’s the least of his … peculiarities.

I came across this woebegone Orc in what passes for a bar in this Lightforsaken place; he was hitting the sauce quite hard. What jumped out at me was his decorations. He’d seen action, and plenty of it, from the looks of things. How had he managed to be sent off to the nether regions of Outland? He obviously didn’t want to be here.  Whatever he did, it must have been pretty terrible, considering that we needed warriors of his prowess against the Lich King more than ever.

I decided to reach out to him and bid him welcome in our mutual hell-hole. It’s good to maintain good relations with your fellow inmates.

“Hello, friend! Might I buy you a drink and make you welcome?” I’ve always had good luck with the offer of free ale.

“Well, I be glad fer the offer, kind Blood Elf, but yah might not wanta be seen round me. I might be having a string of bad lucks.”

I had to laugh at that. “Oh, not to worry – nobody gets assigned here without having bad luck, and plenty of it!  My name’s Lor’far.”

Taking the offered hand, he offered “Mognog, formerly of the third expeditionary force in Northrend, pleased tah meet ya.”

“So what terrible things did you do to get assigned here, good captain?” I could see the rank insignia was fairly new, so he probably got demoted, too. Oops!

He didn’t seem to mind. “Well, since yer buying, I owes ya a story anyway. Have a sit.”  He paused, gathered his breath, and seemed to focus off a thousand miles and several years away. 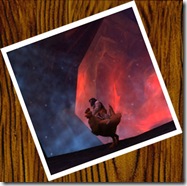 “I was assigned to Orgrimmar fer just a short time when it first happened. If I didn’t have a picture, Ida probably been shot. This little Dworf came riding through the back gate … on a chicken. Stark neckid, too! He came through, rode into the Chasm, and musta hearthed out, ‘cause he didn’t come back out thatta way. I got lotsa free drinks tellin’ that story, lemme tell ya.”  He paused, and snorted into his brew.

“I kept gettin’ reassigned, so as to keep the story outta the wrong ears. Nobody wants ta admit to that sorta security breach. But here’s the thing.  He kept poppin’ up.  Same Dwarf. Onna chicken.”

“Thunder Bluff, he come running in right under Thrall’s nose while he’s visiting, peed on the fire, and jumped off the bluff. Him and his chicken.”

“Undercity, they was already beatin’ on this space goat pally that was in there, and he come runnin’ in, on da chicken, and peed on the fire and ran out without anyone even noticin’. On a chicken!”

“At least in Silvermoon we got a few pieces of ‘im, until he let loose the polar bear.”

“The thing they all had in common was that I was there every time. This nekkid Dwarf, onna chicken, and there I was.”

“So, they tells me. Maybe I’m bad luck or somethings.  ‘Nothing personal, Mog, you just bad luck!’ they say. Took me outta a prime spot in Icecrown, and dumped me here. Didn’t want a nekkid Dwarf on a chicken taking out that Arthas fellow, I guess.”

“I … I …”   I have to be honest, I had nothing to say. What a story! Where do they come up with this stuff? Still, it was imaginative.  It was worth a drink or two.

“Well, here, have another, and we’ll waste away together in obscurity, eh, Mog?”

He grimaced – might have been a grin – and grunted. “Sure, and I’ll buy ya the next one, and you can tell me how you ended up here, too.”  Well, I had that coming, all right.

As the bartender set out the next round, the alarm went up. “ENEMY SIGHTED, AIRBORN, INBOUND!”  What?! Why would Alliance – or the Legion, for that matter – want to attack this place?

We ran up to the guard tower and set our bows to the ready, as a green proto-drake hove into view. Atop it was a Dwarf, looking a little tipsy and quite smug.

“’Allo there, ya Horde-types, da ye have a fire that needs extinguishin’ down there?”

The very young and foolish sergeant Na’trite offered “Not here, you silly Dwarf, it’s at Thunderlord St—GAK!”  Mog’s got a good grip on him.

He looked at me, drew himself up, and took a deep breath. “Ya be excusin’ me, Lor’far, I gots business what needs attendin’ to.”

He mounted up and headed out. I never found out what happened to him.

Sometimes, I wonder about that story of his. He reaction seemed genuine, but I have to say, that is one of the most far-fetched stories I have ever heard.

I will write you again by next week. Hopefully, there will be good news.

Afterword: The letter was dropped back into a mailbox for delivery, with apologies from those that killed the mailman attached. “We’ll not be opening mail, even the Horde’s, on my watch!”, the newly appointed postmaster claimed.